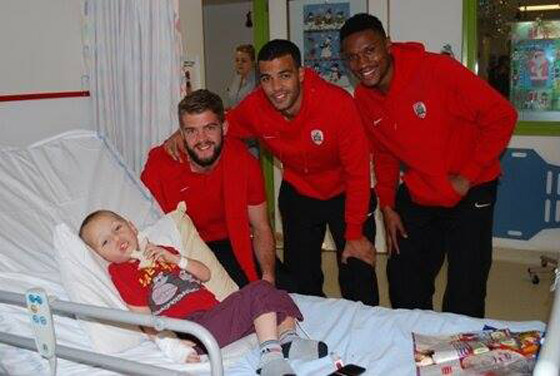 PLAYERS from Barnsley Football Club have brought some festive cheer to children at Barnsley Hospital.

The club's first team squad, which included 24 players, visited the hospital's children's ward on Tuesday to hand out presents and pose for photos.

One player even dressed up as Santa and a number of patients and staff were given photo opportunities with their favourite players.

Some of the squad also paid a visit to the special care baby unit - where premature or sick babies are looked after - to speak to parents and staff.

A spokesman for Barnsley Hospital said: "It was fantastic to have the players pay a visit - the kids loved it and so did the parents!

"We're really grateful to the club and all the players for the presents they gave and for showing such an interest in our patients and staff."

Martin Cranie, captain at Barnsley, said: "The lads wanted to show their appreciation for all the hard work staff and nurses carry out at the hospital.

"It's never easy spending time in hospital, let alone at this time of year, so it's good for the lads to give something back to those who might have to be away from their families at Christmas time."