A NEW headteacher has been brought in to run a failing school after its former head stepped down.

Judith Hirst has been appointed as interim executive headteacher at The Edmunds Primary.

It follows the departure of former head Sharon Mapplebeck, who stepped down earlier this month after 11 years.

She left just days after the school received a damning report by Oftsed which saw it nosedive from 'good' in 2011 to 'inadequate' and requiring special measures.

Inspectors were critical of the achievement of pupils and the quality of teaching as well as the school's leadership and management.

They also said the behaviour and safety of pupils 'requires improvement'.

He said: "Judith is a local leader of education and also the substantive headteacher at Sandhill Primary School.

"We look forward to working in partnership with Judith and staff at The Edmunds to bring about rapid improvement to remove the school from its Ofsted category of special measures as soon as possible."

The report, published on November 29, said pupils' achievement is inadequate because too many are not making the progress they are capable of.

Attainment in reading, writing and mathematics is also 'too low' in key stage one and two. Teaching was branded 'inadequate' with the report saying teachers do not have high enough expectation of what pupils can achieve.

It also blasted governors for not holding school leaders to account.

END_OF_DOCUMENT_TOKEN_TO_BE_REPLACED 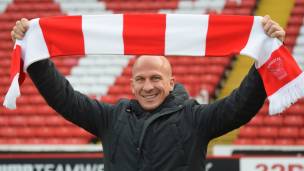