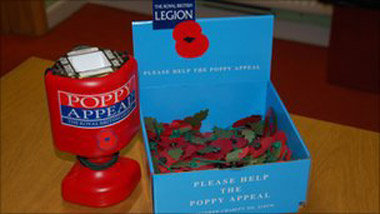 The theft of two Poppy Appeal boxes has been described as 'shameful'.

Opportunist thieves took the boxes from Amy's fish and chip shop on School Street, Darfield, and also a cafe on Church Street.

Trevor Smith is the secretary for the Darfield branch of the Royal British Legion and has been organising the appeal in the area for 15 years.

"It's very disappointing because the money is desperately needed," he said.

"I'm ashamed because presumably it's been done by Darfield people. It's a terrible situation because we've never had this in the past.

"Last year we handed more than £5,000 over and the money goes to an excellent cause.

"For every man killed there are another 25-30 injured. In the First World War the Barnsley battalions were devastated."

The thefts are being investigated by the police and CCTV footage may have caught the chip shop thief in the act.