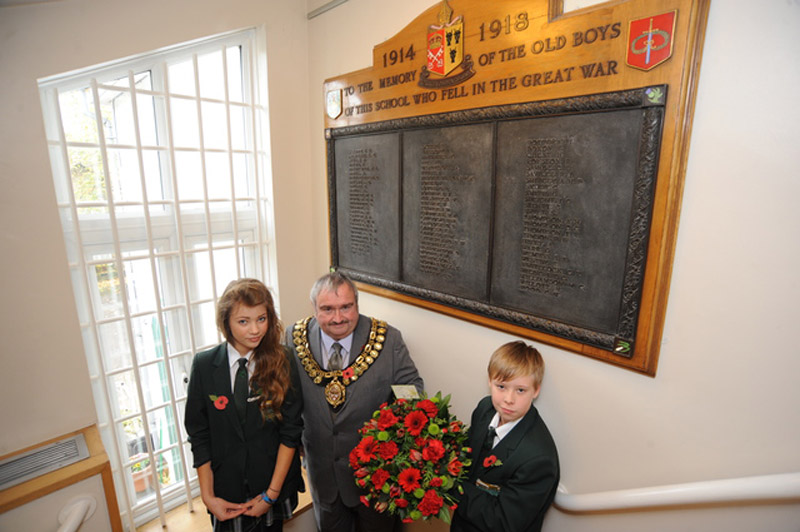 A HISTORIC tradition of reading out the names of those taught at Barnsley Grammar who died in both world wars is being kept alive by Horizon Community College.

It's a tradition that's been in existence since the end of the First World War to recognise former pupils of Barnsley Grammar School, which was in the building where the Cooper Gallery is now before moving to Shaw Lane in 1912.

The ceremony used to be held at Holgate, the site of the old grammar school, which has since merged with Kingstone to form Horizon Community College.

Six year nine pupils from Horizon went to the Cooper Gallery on November 11 - built in 1769 as the new home for Barnsley Grammar School - where they joined Royal British Legion members and Barnsley mayor Cllr Ken Richardson for the special service.

It started with pupil Aidan Stirk playing the Reveille and then the names of 76 former pupils who died in World War One and 98 who perished in World War Two were read out by Aidan and fellow pupils Darcie Brown, Courtney Wright, Heloise Slater, Anthony Pagdin and Joe Sheldon.

A wreath was then laid in front of the war memorial plaque, upstairs in the Church Street gallery, by two pupils and the mayor.

Horizon governor John Bostwick, who organised the ceremony, said: "The reading of the names has been going on since 1918 for all the boys who were educated here when it was a school.

"It's vitally important to maintain this tradition to ensure their memory continues and acknowledges the sacrifice they made."