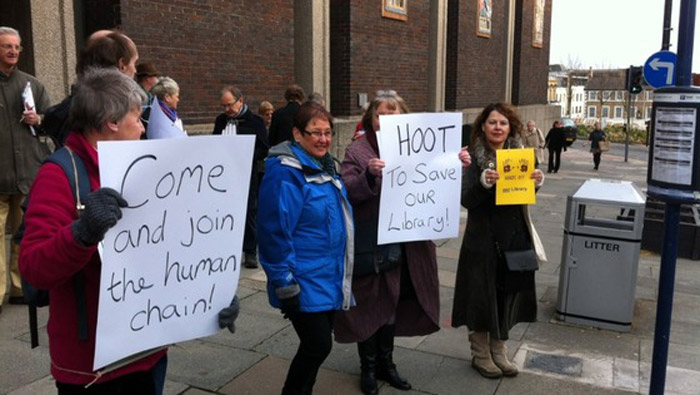 AROUND 200 campaigners who want to save Barnsley Central Library formed a human chain around the building.

They waved home-made banners and chanted throughout Saturday's demonstration.

Local campaigner Dave Gibson said: "Our petition against the demolition has had over 4,000 signatures and we have had a very positive response by standing outside the library so far.

"It's a well-used, purpose-built library which is less than 40 years old. It's crazy to pull it down. The library service in the centre of Barnsley will get worse."

The council says redevelopment of the Shambles Street site will enhance the town centre and increase footfall, contributing to increased spend and improving Barnsley's economy.

The vision for the new £17million sixth form is 'an inspirational and vibrant building', which will allow Barnsley to compete in the sixth form education market on a regional level, offering better opportunities for Barnsley's young people and attracting students from other areas.

The project is being delivered within tight timescales, with the aim of demolition the library starting in the new year and the new college opening in September 2015.