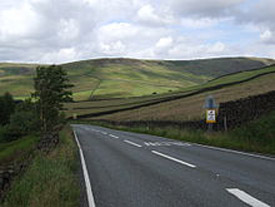 A BARNSLEY motorist has been banned from driving following a serious accident on the A57 Snake Pass.

Ziqing Lin, 38, was returning home to Hamble Court, Barnsley, but unfortunately his sat nav ran out of battery, High Peak magistrates were told.

He took a wrong turn and found himself on the A57, a road he had never driven on before.

Witnesses said his driving was erratic, speeding up to 60 or 70 mph on the straight parts but then slowing to about 20mph round the bends.

John Cooper prosecuting said on one bend Lin did not slow down and instead found himself going into the left, over correcting and colliding with a VW Passat travelling in the opposite direction.

As a result of the crash the Passat left the road and ended up 15 feet below the road in a ditch.

The driver suffered a hairline fracture at the bottom of his spine while his passenger broke a small bone in his neck.

Lin admitted driving without due care and attention following the accident just before 7pm on May 2.

He said a driving disqualification could have serious implications for the business which relied on fresh produce being collected as it was too expensive to get it delivered.

The court was told that Lin had swerved to avoid hitting a bird at the edge of the road and there had then been a car coming in the opposite direction which he had been unable to avoid.

“He apologises for a momentary misjudgement,” said Mr Lau.

Lin admitted liability to his insurance company and compensation for both for the vehicle and personal injuries had been paid.