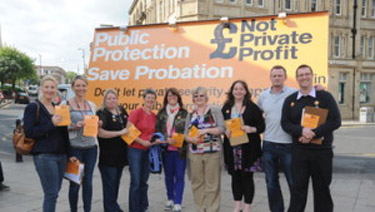 PROBATION officers went on strike for only the fourth time in 106 years last week.

Barnsley members of trade union Napo joined in the 24-hour walkout against the government's plans to privatise 70 per cent of the Probation Service on November 5.

As they walked out of their headquarters at Acorn House on Oakwell View, staff were cheered by fellow trade unions in Barnsley who turned out to support them.

Since the government's announcement in May, Napo has spoken strongly against the proposals.

Members in Barnsley believe fragmenting the public sector service into 21 private companies and one national service will undermine public protection and put communities at risk and fail to provide the adequate service offenders need to turn their lives around.