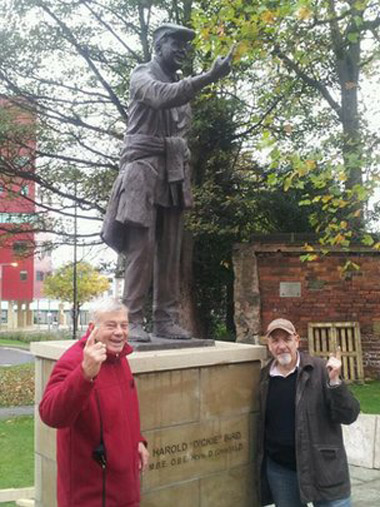 DICKIE Bird's statue has been raised - to stop people hanging rude items on his outstretched finger.

The sculpture has become a magnet for revellers who have hung all sorts of items on it, including condoms, pants and bras.

Dickie played cricket for Yorkshire before becoming an umpire, notching up 66 Test matches, at the time a world record.

Dickie said he didn't mind people having fun hanging items from the life-size bronze statue but worried about people falling off the plinth.

He said: "I don't mind it at all. They can take as many photographs as they like but they're climbing on to it and they might fall off."

Sculptor Graham Ibbeson said the plinth beneath the statue has been raised to about 5ft high (1.5m).

He said: "We're not going to stop it. What we're going to do is make it a little more difficult.

"On Friday and Saturday night everybody who wobbles home from the town after a few sherberts seems to gravitate towards that finger, with knickers, brassieres, condoms, whatever.

"It's horrible when people are abusing it like that. It is a bit of fun, but it's a bit inappropriate."