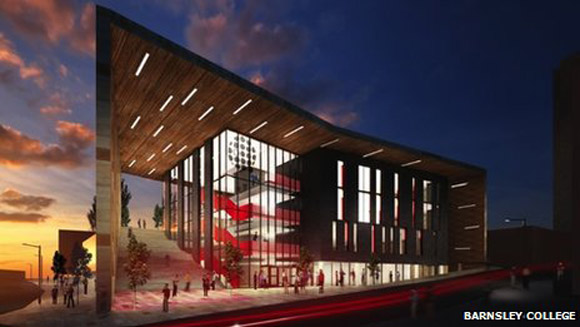 THIS is the first look at Barnsley College's new proposed sixth form.

The college wants to build the sixth form on the site of the town's Central Library, on Shambles Street, and expects 1,150 pupils to use the ultra-modern facility.

It means the library - along with a parade of shops, offices, an electricity substation and private car parking - will be flattened to make way for the new 7,000 square metre college building. It will be relocated to the historic Wellington House on Market Street.

It would replace the existing sixth form on Eastgate.

It will cost about £16million, with £5.3million in grant funding already secured. The remaining finance is being raised through asset disposal and borrowing.

The proposals will be discussed by the council's ruling cabinet on October 23 and, if given the go-ahead, should be completed by 2015.

The college's principal, Colin Booth, said: "It's very good news that a new sixth form college will be built in the centre of Barnsley.

"The college is working closely with Barnsley Council on how to ensure the new building has the best possible impact on the overall development of the town centre."

Council leader Sir Steve Houghton welcomed the proposals, saying: "It will improve the gateway to the town centre from that end of town and increase footfall for the shops and businesses in the vicinity.

"The proposal indicates the college would have the potential to bring £7.7million into the local economy."