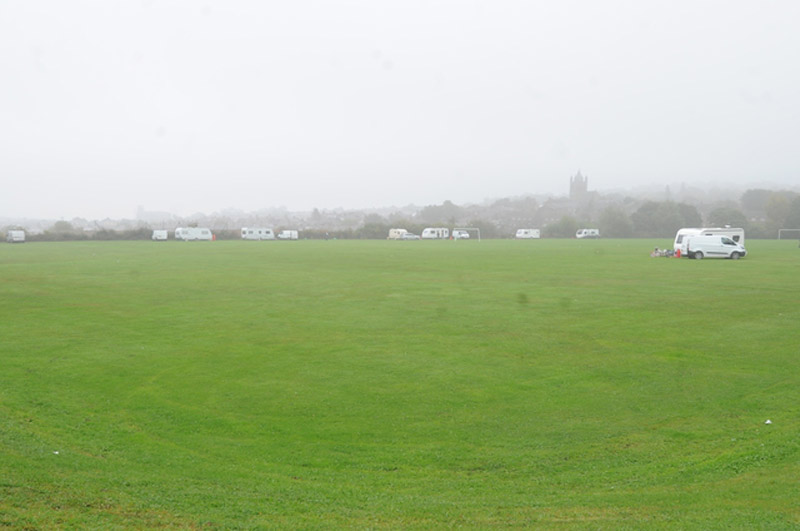 Football Team Told Not To Play After Travellers Move To Field

A FOOTBALL team was told not to play to 'avoid confrontation' with travellers.

There are about 12 caravans spread across the length of pitches off Broadway, Kingstone, including next to goal posts.

Some even have their own generators and aerials outside.

Commercial FC was due to play there on Sunday but manager Michael Thomas was advised by a Barnsley Council worker not to let the game go ahead.

Michael was forced to find another venue for the game, which cost the club additional money.

Michael, 29, said: "We played last Sunday morning and I think they came that night, or Monday morning. The council told me to not play the game because it will avoid confrontation.

"It was a cup game and we were supposed to be at home and now we had to play away, so we incurred some travel costs for that."

It isn't the first time Commercial FC has had to change fixtures.

Michael, who is also the secretary for the team, said: "It happened a while ago as well and we had to cancel games before the season, so that disrupted us.

"I remember we played a friendly before the season and we had to go and knock on caravans to ask them to move.

"There's not just us who use it either, there are some junior and senior teams as well. It's quite dangerous when you think about it.

"More than anything it's the rubbish they leave behind and they chuck all their dirty nappies on the pitch and I've had to clear most of this up before.

"They're driving their cars and vans on the pitch as well and it's ruining it. It's annoying because last week we played a home game and it's the first time I have seen the pitch looking so good.

"I daren't even look at it now because I might cry. It's frustrating because I can't do anything about it. I said to the council isn't it about time something is done with the fencing and the gate to make it more secure."

A spokesman for Barnsley Council said legal action is being taken to remove the travellers from the unauthorised encampment on the playing field at Kingstone.