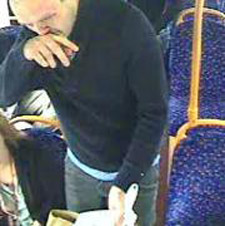 THE police have released a CCTV image of a man they would like to speak to after an assault that happened on a bus.

At around 4pm on Monday, August 5, police received reports that a 16-year-old boy had been assaulted whilst on the number 218 bus, which was travelling between Barnsley and Rawmarsh, Rotherham.

The man in the picture is described as white, 6ft tall and of stocky build. He is aged between 30 and 40.

Anyone who witnessed the incident, or who can identify the man pictured, is urged to call South Yorkshire Police on 101 quoting incident number B/72393/13.