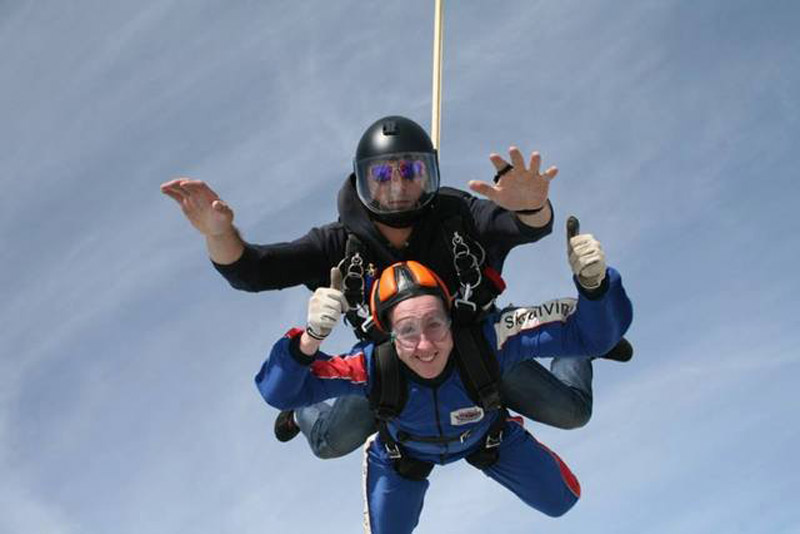 A BRAVE man who has been given between weeks and months to live has completed a charity skydive to raise money for lifesaving treatment.

Dan Moxon, 23, from Kendray, jumped 15,000ft out of a plane last Wednesday with his mum, Dawn Eastwood, 39, and friend Ashley Tate, 23, to raise enough money to travel to America for treatment in a last-ditch effort to cure him.

Dan, of Swannee Road, known as 'Super Dan' to his family, was diagnosed with leukaemia in 2009. He received a bone marrow transplant but relapsed earlier this year.

He was placed on a new drug initially but, after this caused nerve damage, he underwent chemotherapy.

While it eased the spread of the disease, it was not a cure and last month doctors said nothing more could be done.

But despite the devastating news, Daniel says he is determined to keep on fighting.

"I said to the doctor I'm not ready to put my my boxing gloves down yet. You just can't let it get on top of you," he said.

Dan and his family need to raise about £250,000 for the treatment in the US and they're looking at different options.

The Daniel Moxon Chance for Life Appeal has been set up and so far about £18,000 has been raised.

Dan wanted to do the jump before he became ill and was raising money for the Teenage Cancer Trust. He says he still wants to honour that commitment and has raised more than £600 for them.

"It was absolutely amazing, I can't really describe it," Dan said after the jump.

"It takes your breath away when you're coming down to earth. I would definitely do it again."