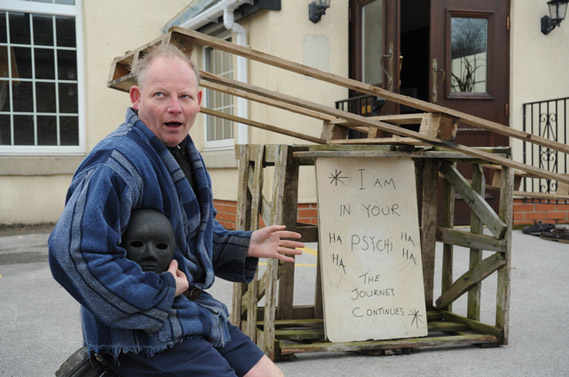 AN eccentric Barnsley pub landlord famed for his artwork will appear on television on Wednesday night.

Anthony Youel, who has run The Monkey in Thurgoland for 14 years, acknowledges his lifestyle may seen unconventional to some - including local parish councillors - but, ultimately, it's a happy one.

His artistic creations have made Anthony into a local celebrity, but he credits his work for helping him through tough times.

"Doing my artwork has stopped me destroying myself," he said. "It cheers people up and they have a laugh and think 'I wonder what he's going to have out today'."

During his first eight years as landlord, Anthony ran the pub with panache, however a series of factors, including the smoking ban, the isolated location of the business and the economic downturn, led to a career re-think in 2007.

Although the public house remains open, the decline in takings meant the married father-of-two switched to concentrating on serving up artwork, rather than food and drink.

"It's the pub without a regular, everybody who comes, comes once or twice a week.

"I tend to make people think and shock people because we're in a world now where everyone's told what to do, when to go out and what clothes are in fashion. I don't think there's a pub like this in the country."

While the outside of the pub showcases a series of exhibits, including a giant red plastic hippo, Anthony, who has never visited an art gallery, feels his better work remains inside.

Fifty-two people have been willing to pay a small entry fee for a look around and only a single visitor had a complaint.

"I never achieved at school, I was always the joker. Everything I've done, I've done without education. I couldn't tell the time or tie my shoe laces until I was 14. I was a very slow but happy kid.

"You can be an underachiever at school but you can still achieve in adult life. I think I'll get there in the art world."

Anthony, who suffers with dyslexia and obsessive compulsive disorder, classes his biggest achievements as creating poetry without being able to read or write very well, learning to express himself through art and 'being a nice person'.

His unique personality will be exposed to the nation on Wednesday night with the launch of the new BBC Three series, 'Boom Town'.

Filming for the six-week show, billed as a structured reality programme, took place at the turn of the year, with Anthony due to appear alongside other eccentrics from around the country, who he has never met.

"It's my first time on TV - it's generally a young person's thing these days but you can't beat experience.

"I'm starting small in the show, going through all six shows and then I finish with a bang at the end.

"My last installation on the new show will cause a backlash. People have got to watch the last one, it will get record viewing figures."

Married to Christine for 27 years, Anthony, who grew up in Dodworth, lives with his wife and two adult children Sarah, 26, and Perry, 21. He admits his unusual lifestyle has attracted a fair amount of criticism - including a disapproving letter from Thurgoland Parish Council and some incidents of vandalism to his displays - but negativity is something he and his family have learned to handle.

"They've just got used to it now. They all love me so they just trust me. I'm the leader of my pride, like the male lion. I hunt and forage for them and take care of them.

"My daughter would defend me rigorously, my wife wouldn't say anything and my son probably thinks it's funny."

Boom Town is on BBC Three on Wednesday night at 10pm.