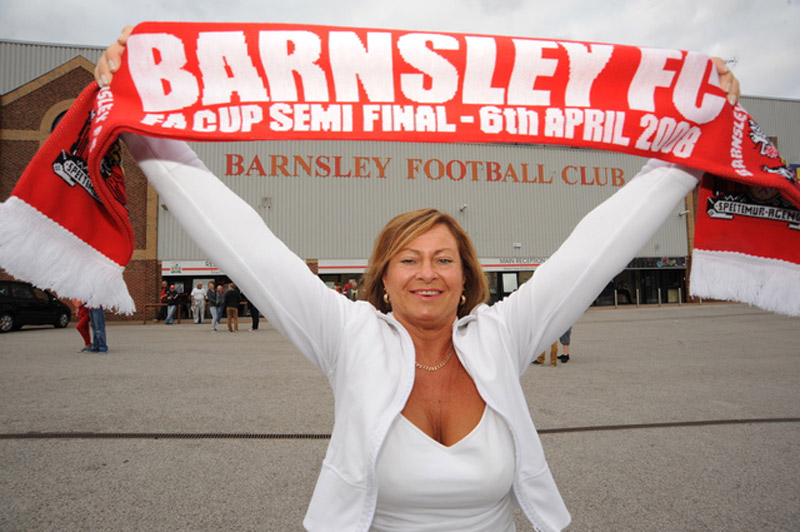 Is This The Reds' Biggest Fan?

THERE are some big Reds fans on We Are Barnsley, but is this the club's biggest fan? She's only missed two games in 25 years!

The only two games that Jane Utley's missed were away dates at Chelsea in 1998 and Oxford in 1999.

She attends every reserve game - home and away - as well as the junior matches and clocks up more than 10,000 miles a year cheering on the club.

Jane, from Worsbrough, has been watching Barnsley since she was six, is an officer at Barnsley Council and books two days off work for long away trips and uses most of her annual holiday allowance for football games.

"I've seen some Barnsley fans get married to Sheffield Wednesday supporters and all they seem to do is argue. Can you imagine that? Besides, who on earth would marry me knowing how much time and money I spend on football?"

It was Jane's dad who started her love for the club by taking her to her first game in the 1960s.

"There's a group of us who go every week and it really is my life. All of my friends know that's where I spend my time and I don't really care what people think.

"I refuse to work out how much I spend on watching Barnsley, it'd be too devastating. It's well into the thousands.

"I drive to most games but sometimes go on a coach. I even got a plane to Plymouth when we played them a few years back.

"I work flexi-time at the council so sometimes I'll get into work early and clock off in the afternoon so I can get to the under-21 games at Oakwell.

"When the fixtures come out I book time off work, so I've already taken two days off for the Bournemouth and Brighton away games which are on Tuesday nights."

Jane's best season was when the Reds were in the Premier League and her all-time favourite player was Matty Appleby.

"I even went to see him at Oldham and Whitby after he'd left Barnsley. To be honest, all I care about is that the players try their best. As long as they do that, I'll keep supporting Barnsley forever."