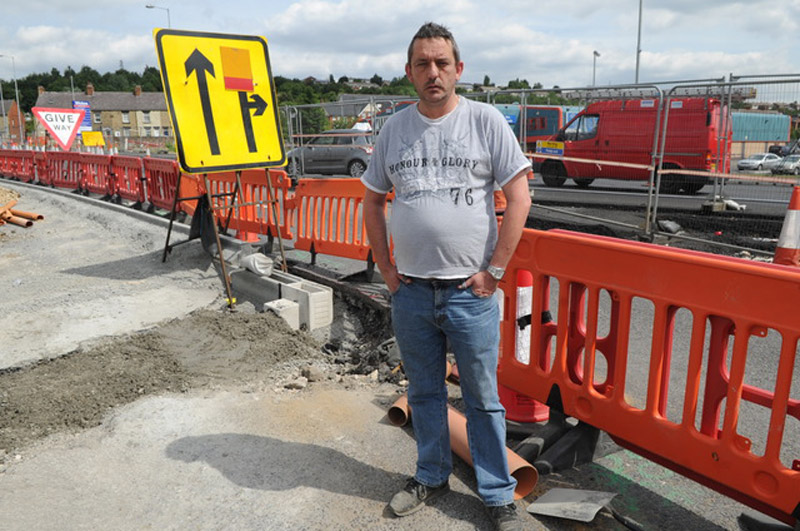 Businessman Fears Accident On A61

A BUSINESSMAN fears someone could be killed because of the long-running roadworks on the A61.

Tony Buckley, owner of First Call Building and Garden Supplies on Peel Place, off Old Mill Lane, said traffic chaos created by the bus corridor near Wickes was dangerous and could lead to an accident.

Tony, 46, said: "I know it's got to be done and I don't want to stand in the way of progress, but someone is going to get killed.

"Our staff and customers are having problems getting in and out of Peel Place. One driver from a supplier has refused to come back because he said it was dangerous."

Tony said traffic leaving Peel Place to head up Burton Road had to cross two lanes - and then filter into a third lane.

"There are give way signs and cars stop but people behind don't know why and are slamming the brakes on and hitting the horn. A couple of times we've nearly been smashed into by people who don't know what we're trying to do. They're coming through like Lewis Hamilton."

Tony also said he's lost business because of the roadworks, and said his takings were down £1,800 over the last month, compared to the same four weeks last year.

He said customers drive past because they can't see how to get into Peel Place and others would visit to look around, but didn't return because of the roadworks.

He added: "I think all the businesses down here should be offered compensation. No one has been out to see how it's affecting us. We all got leaflets about two weeks ago but no one said how bad it was going to be.

"It's bad at the best of times, but rush hour times are the worst."

A spokesman for the council said new traffic islands were being constructed and the carriage way along Old Mill Lane was being resurfaced.

He added: "As will be appreciated, working in a confined area and maintaining acceptable traffic flow is difficult and involves changing traffic management layouts as areas of road are completed.

"Discussions have previously been held with First Call Building and Garden Supplies and some of their requests and concerns have been accommodated in the present layout.

"Access into Peel Place has been maintained at all times, and signs have been put in place informing the public that Peel Place is open.

"We're not pretending the current arrangement is perfect but the approach has been to complete the roadworks as soon as possible to reduce disruption in the long term."

The spokesman said access to Peel Place had been maintained at all times and that signage and the design of driving lanes were adequate.