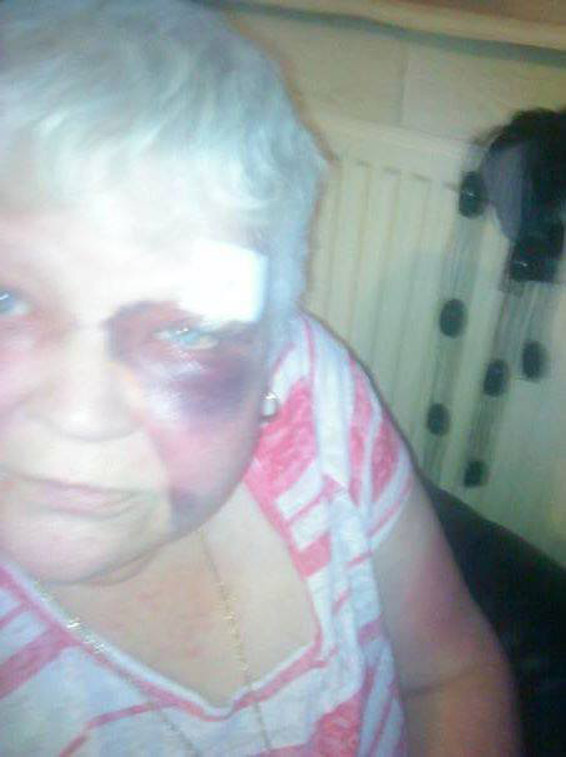 Grandmother Attacked In Her Own Home

A GREAT grandmother is too scared to stay at her home after being smashed over the head with a brick while she laid in bed.

Pam Murphy, 69, said she awoke to find four balaclava-clad men in her bedroom - and had blood trickling down her face.

She was sleeping in her bed in the living room when she heard a bang and then a felt a blow to her head.

"I was scared to move," said Pam, of Manor Crescent, Grimethorpe.

"I felt the blood coming down my face and I thought they were going to kill me. I was that frightened.

"I'd say they're just four cowards. That's what I think. I was begging 'please, please don't hurt me' and I didn't know if they would or not."

Pam said they searched the house with one man demanding to know where her money was.

One intruder tried to take her safe, she said, but it was securely fastened to the floor.

Instead the group made off with her handbag but Pam said there was no money in it and her son found half of its contents strewn on a nearby field.

When the men had gone, she found a brick. Her living room window had also been smashed, leading Pam to believe that the brick had been thrown through the window and was then used to hit her on the head.

She suffered cuts on her eyebrow, ablack eye and bruising to her face.

She said her back door window had been smashed to gain entry and she had left her keys in the lock.

"After what's happened I stay here in the day time and stop at my son's at night," she said.

"I daren't come back home - I'm afraid of it happening again. I keep myself to myself.

"As far as I know I've got no enemies, I know a lot of people and I just pass the time of day with them. I don't know why I needed that."

Pam's family is now offering a reward of £5,000 for information about the attack.

Anyone who saw anything suspicious is urged to call police on 101 quoting incident number 177 of July 28. Alternatively the can call Crimestoppers anonymously on 0800555111.