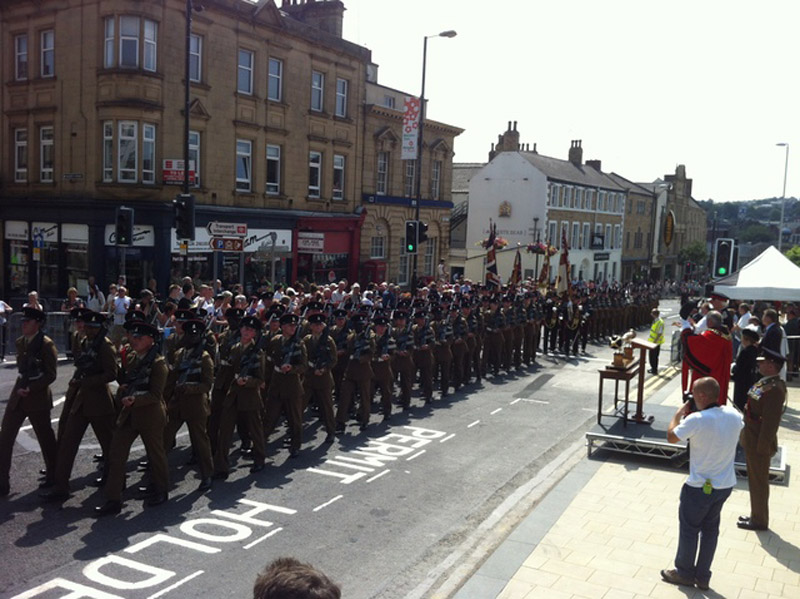 NERVES and excitement were present in Barnsley troops who took part in the Freedom Parade on Thursday.

Private Matthew Bennett, of Shaw Lane, felt a little anxious ahead of the march - because he knew his grandparents and sister would be watching.

"I had some family come down to see me so I was excited and a bit nervous at the same time," said Pte Bennett, 20, who joined the army in 2009 and completed a six-month tour of Afghanistan last year.

"There is an amazing sense of pride about marching through your hometown though and it's good to be able to do it because we spend so much time away."

Pte Bennett is preparing to be deployed to Kenya shortly to undergo further training.

Pte Chris Corns shared some of those nerves. The 22-year-old Wombwell lad might have done two tours of Afghanistan in 2010 and 2012, but as he enjoyed a cigarette in the sunshine after the march he wasn't afraid to admit he was feeling a little tense.

"I was a bit nervous because my family were watching," he said.

"It makes me feel proud to be here though, I only get back a once or twice a month."

Casting an eye over their performance was Colour Sergeant Major Leon Egbury, who hails from Darfield, and has been in service 23 years.

"We always get a good crowd and a good turnout in Barnsley," he said.

"A lot of soldiers in our regiment are from Barnsley and a lot of soldiers from here means a lot of families. We've got the good weather as well," said the 39-year-old, who has done tours of duty in Bosnia, Northern Ireland, Kosovo, Iraq and Afghanistan.

Col Sgt Maj Egbury said it was a special day for him as he will be returning to his hometown in two weeks, where he will be taking up a role in the army forces careers office.

"I've been away for 23 years and I am coming back home which is fantastic," he added.