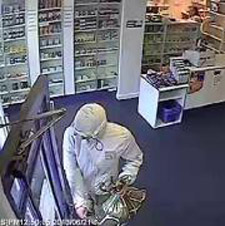 A THIEF threatened staff with a screwdriver before stealing money from a till.

The man walked into a pharmacy on Wath Road in Mexborough on Friday June 21 at around 12.50pm and demanded money.

He left the scene after being given the cash.

Police have released this CCTV image are of the man. He had his face covered by the white jacket, which was zipped up with the hood pulled over.

He was also wearing beige coloured trousers and was holding a Next carrier bag. He is around 5ft 8ins tall and is of a slim build, with a local accent.