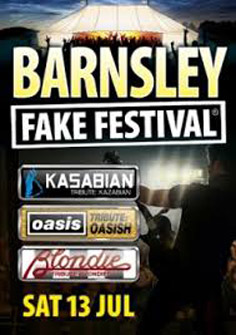 Barnsley Fake Festival Gears Up For Its Return

FINAL preparations are being made for this year's Fake Festival at Locke Park.

Taking place on July 13, Barnsley Fake Festival will be kicking off with some of the greatest local musical talent, hand-picked by the Fake Festivals team.

Jez Lee, organiser of Fake Festivals, said: "At last year's festival in Barnsley we were knee-deep in mud - it was a true festival atmosphere.

"We’ve been showcasing local unsigned talent for seven years now. The success of some of the artists has been remarkable."

Eddy Anderson, aka Tom Meighan of Kazabian, said: "We love the fact that Fake Festivals stays true to its name.

"The event is all about re-creating the look and feel of a major festival, not only with the sound and lighting, but also with the stage and tribute bands."

As well as the headlining tribute bands, there is a also a variety of local artists performing.

Fake Festival is at Locke Park on June 13. Will you be heading down?