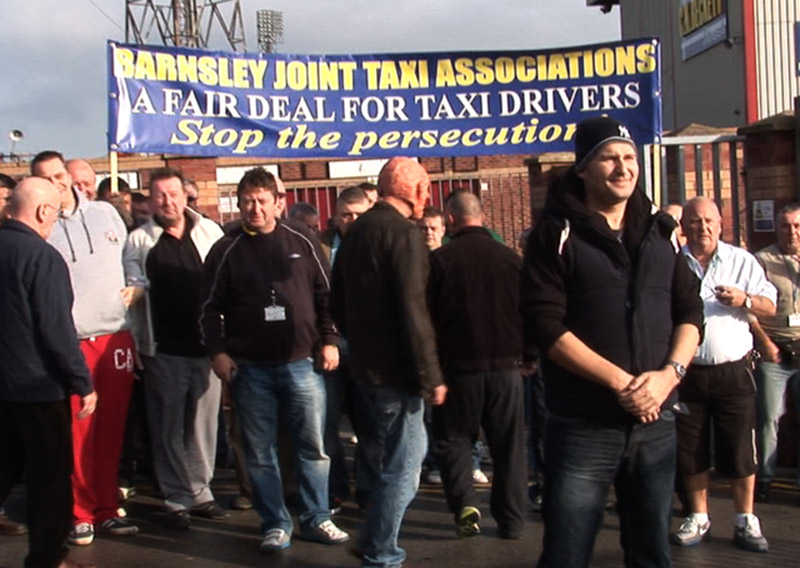 SCORES of Barnsley taxi drivers have protested outside Oakwell after 11 of their colleagues lost their livelihoods due to new rules introduced by the Council.

Holding up a banner that said 'Stop The Persecution' Barnsley Hackney Carraige Association and Barnsley Private Hire Association stood outside the entrance of Oakwell as councillors arrived for their monthly council meeting.

Taxi drivers say they are being hit hard by excessive fees which have doubled since 2009 - they also say a new 'three strike' rule has seen 11 drivers put out of work, sometimes for minor points that have been picked up on by licensing officers.

Mark Cocks, chairman of the Hackney Carriage Association, said: "They are taking mens livelihoods away from them for silly little things. "They always say the safety of the Barnsley public is ultimate - and it is - but for silly things like not filling in our daily check sheets? How is that unsafe? Why should we get a strike for that? Obviously, for really serious things we accept that yes. But for silly, minor, little things its ridiculous."

Every time a taxi driver gets a speeding ticket it's an automatic strike against their license - they can also be penalised for things like having a dirty car and for tail lights being out. They have to fill in a daily sheet outlining a vehicle check - and it that isn't done correctly, it is also a strike against them.

David Graham, of Blue Line Taxis, says he thinks it is unfair that the council's licensing officers have focussed on the legitimate drivers - and not the illegal ones.

He added: "Barnsley taxi drivers are frustrated with the actions and attitude of the council with rising costs and draconian conditions.

"These conditions are new and there is getting to be more and more of them - but at the same time what we get in return is very little.

"We've got seven enforcement officers from the council enforcing these conditions on us - but so far this year they have only prosecuted two illegal taxis.

"The thing is you can only check so much. We're not mechanics, we are drivers. If there's a fault behind a tyre for example, you can't see that without ramping the car up. We've got no problem with any public safety issue we just feel that they impose these things without talking to us. Taxis are a requirement for the people of Barnsley - they should talk to us so we can negotiate on these conditions."

The council said it will be talking to the taxi drivers over the next few months about their complaints.