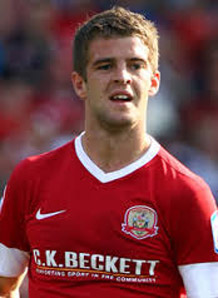 MARTIN Cranie has put pen to paper on a new two-year deal at Barnsley Football Club.

The 26-year-old defender, who began his career at Southampton, made 41 appearances for Barnsley last season.

Cranie’s signing comes hot off the heels of Bobby Hassell, Tomasz Cywka and Chris O’Grady committing their immediate futures to the club within the last week as well as the signing of Dale Jennings from Bayern Munich.

"I am absolutely delighted to sign a new contract at Barnsley," the former England Under-21 international said. "There was never any doubt that I would be coming back.

"The end to last season will be in everyone's minds for a long time. I don’t think you will see anything like that again. I’ve watched it back a few times and I still can’t believe it happened.

"It’s going to be a brilliant season again. It gets harder every year, there are strong Premier League teams coming down, but as you saw last year Wolves, Blackburn and Bolton all struggled in parts and of course Wolves went down again.

"I’ve still got it in my mind playing the top teams in the league last season and winning and it shows we have got nothing to fear this season from any side.

"Coming in today the lads seem very up for the season already - it’s the same sort of vibe that we ended last season. Hopefully we can get a big crowd in."