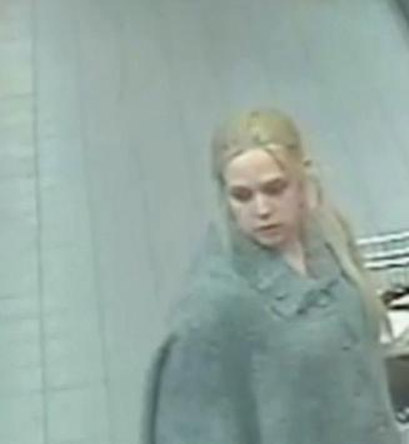 POLICE in Barnsley have released a CCTV image of a woman they would like to speak to in connection with a theft investigation.

At around 2pm on March 25, it's reported that a 25-year-old woman, from Bolton-on-Dearne, was in the Asda store in Goldthorpe with her two young children.

It's believed that the woman had with her a bag from the store ‘Destiny’.

She paid for her shopping and left the store, and it is reported that she noticed that her mobile phone, a Galaxy Note worth around £300, was missing.

She went back into the supermarket and at this point it is believed she noticed her ‘Destiny’ bag was also missing.

It is alleged that another woman in the store took the ‘Destiny’ bag, which contained clothing, the Galaxy Note, and Easter eggs.

Police have released a description and a CCTV image of the woman they would like to speak to in relation to this incident.

She is described as being white, approximately 5ft 5in tall of medium build, with light brown/blonde hair, which is possibly bleached.

It is believed she was wearing a grey jacket with half length sleeves, a white long sleeved top, with black trousers and black shoes.

Anyone with any information about this incident should contact South Yorkshire Police on 101 quoting crime reference number B/27556/13 of 25 March 2013. Alternatively, people can contact Crimestoppers anonymously on 0800 555 111.