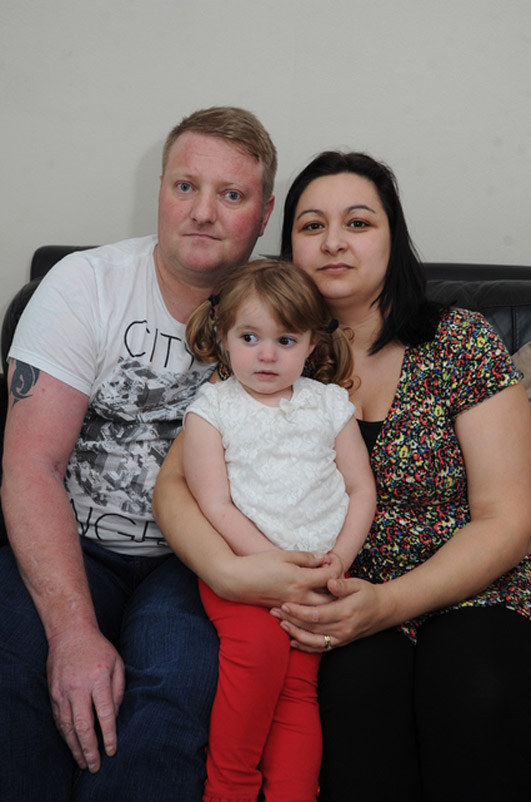 A COUPLE who currently have just £2.58 a week left after paying their bills say they're staggered after being told the new 'bedroom tax' will cost them an extra £840 a year.

Ian and Melanie Tattershall live in a three-bedroomed council house in Great Houghton with their two-year-old daughter Ruby.

But Ian, 36, also has two sons from a previous relationship and has joint custody of both boys.

That means the boys spend three nights one week and four nights every alternate week living with Ian and Melanie at their home in Mount Avenue.

The couple have been told by Barnsley Council that even though Ian has joint custody of his sons, the bedroom they sleep in in his home is classed as a spare room and therefore subject to the bedroom tax.

Ian, a former carpet fitter who is now registered disabled because of crippling arthritis and other medical problems, admits he's baffled.

"I am not saying I need the third bedroom because my sons occasionally visit, this is as much their home as it is my daughter's," he said.

"The council says my sons don't count in terms of bedroom tax because I don't take half the family allowance for them, I let their mother keep that.

"The irony is Melanie, who works part-time, and I were considering fostering but the rules say because of the situation with me having joint custody of my sons as well as having Ruby, we couldn't foster because we don't have a spare bedroom.

"So on the one hand we don't have a spare bedroom, but on the other we do, how does that make sense?

"It's so frustrating, we're not scroungers, we're not asking for hand outs - all we want is to be treated fairly and I can't see how this is fair."