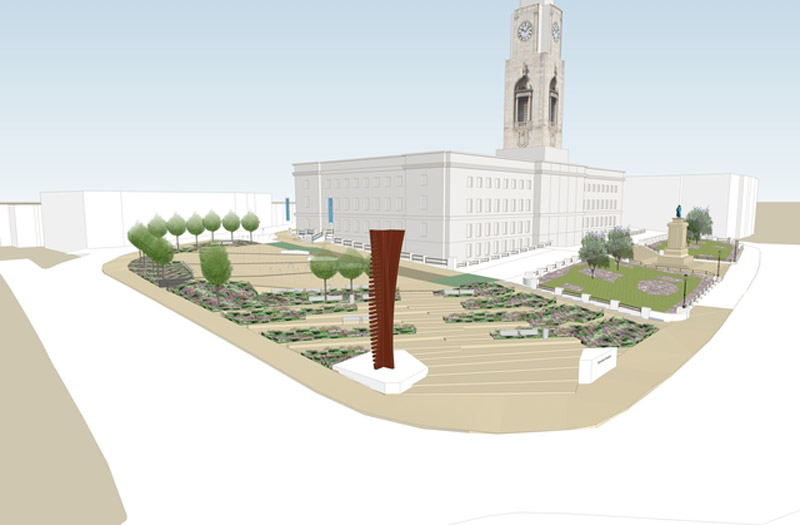 HERE is your WAB Guide to the all-new gardens at Barnsley Town Hall.

The square and gardens redevelopment is part of considerable improvements to Barnsley town centre. Central to these is the June 27 opening of Experience Barnsley, the new museum situated inside the Town Hall.

The Experience Barnsley Museum and the outside works have been part-funded by a grant from the European Regional Development Fund. It's part of the Barnsley Cultural Infrastructure programme that secured £2.5million from Europe to also support the restoration of the Victorian conservatory and potting shed at Wentworth Castle gardens.

This funding is part of the Yorkshire and Humber ERDF Programme 2007-13 which is investing €583m in economic development and regeneration projects in Yorkshire and The Humber.

When completed it will also boast fountains, the much-criticised Nigel Hall sculpture and leisure space.

Nigel Hall's 33ft-high sculpture, named Crossing (Vertical), was created in 2006 and was sited at Yorkshire Sculpture Park in March 2008.

Cllr Roy Miller, said: “We're very grateful to Yorkshire Sculpture Park for the loan of a stunning contemporary artwork that complements the excellent design of the square and creates an international quality public space for the residents and visitors to Barnsley.

"Having a piece of artwork of this standard and calibre for Barnsley will bring visitors from far and wide and provide a boost to the visitor economy, which is an important part of the borough’s economic development strategy."

We've published many articles on the sculpture and the general reaction has been a negative one, with it being dubbed 'The Rusty Comb' by many locals.

Valued at £1.5million, it stands in the bottom corner of the gardens. It's cost £4,000 for its transportation and will cost a further £5,000 a year to insure, but already two people have been caught climbing it - one being arrested.

But Cllr Miller said there will be warning notice not to climb the statue, and added: "We cannot legislate against individuals who put themselves at risk. We cannot stop progress or prevent improvements just because one or two unthinking people might behave badly."

It will cost about £22,000 to run annually - a sum councillors have defended by saying improvements that make the town centre more attractive are vital to attract investment.

- The water feature will have 30 nozzles - placed in three banks of ten nozzles - emitting 30 curved jets of water of varying diameter.

- The nozzles are programmable enabling the jets to move varying the curvature, known as a 'whip' effect.

- Water will be pumped through at 30,000 litres per hour. All the water will be recycled and it will be disinfected and filtered every cycle.

- That will be done by three main energy efficient pumps plus a single, smaller, recirculation pump takes over when the water feature is not operational.

- There will also be 90 LED lights illuminating the water jets. The pumps and lights will be controlled to vary the colours.

- Around 1,000 tonnes of excavated material have been removed from the site, processed and recycled as general fill for use on site, or used in concrete production.

Are you looking forward to its opening?