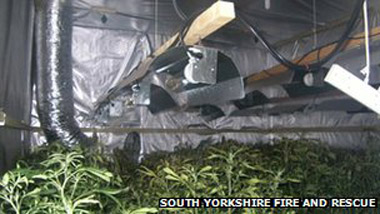 FIREFIGHTERS have warned that they're facing an increased risk of electrocution following a rise in cannabis farm fires.

Blazes which break out in homes being used to grow the drug have risen significantly since 2010.

The service said tackling fires at cannabis farms carry numerous dangers - many of which are hidden.

"At the peak that we've experienced one in 10 of our property fires have been attributed to this type of cannabis growing," said South Yorkshire Fire and Rescue's Andy Strelczenie.

"We've experienced a significant increased over the last three years."During normal fire conditions we would expect to be able to isolate the electricity but in these types of property it won't, so crews going in there are facing a real risk of electrocution."