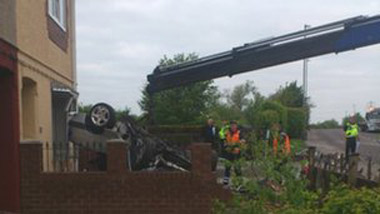 A SECOND man has died after a collision near Shafton.

Two men from Grimethorpe were travelling in a silver Peugeot 306 convertible on Engine Lane.

The car struck a street lamp and continued along the footpath. It came to a halt after plowing through a garden, causing extensive damage to the front of Carl and Julie Jackson's house.

Josh Powell, an 18-year-old soldier, died at the scene after the impact.

Family and friends have posted tributes to Josh on social networking websites.

He completed his training for the British Army last year and became a member of The Light Dragoons regiment.

The 25-year-old man sustained life-threatening injuries, but died two days after the crash.

It is unclear who was driving the car but the two men are believed to have been the only occupants.