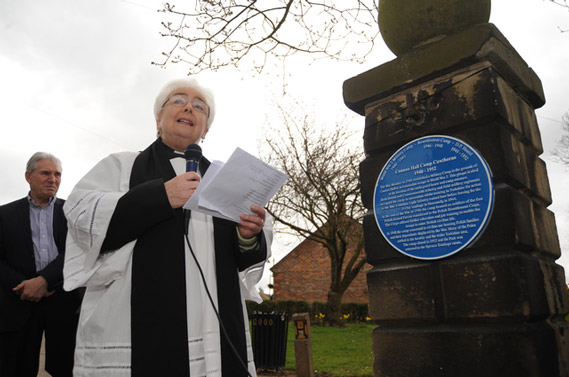 Cawthorne Remembers Its Past With War Plaque

CAWTHORNE has remembered its past with the unveiling of an historical marker commemorating the village's World War Two military camp.

A ceremony to unveil the blue plaque was attended by the oldest resident in the village, 91-year-old Angus Broadhead, along with Eddie Robinson who was based at the camp in 1943.

Angus was a member of the Home Guard, which had its command post on the top floor of the Spencer Arms pub.

But soon Angus and other civilian soldiers were not the only military presence in Cawthorne as Barry Jackson, president of the village's Victoria Jubilee Museum, recalled.

"It was in the aftermath of the Dunkirk evacuation and the government was looking for places to put the soldiers who had been evacuated.

"Obviously they didn't want them all in one place and diversified around the country.

"On July 22 1940, in the park, tents began to appear and two days later the King's Royal Rifles, and the Rifle Brigade, came in at a fast marching pace into the newly erected camp."

As the months passed and Cawthorne was deemed suitable as somewhere to house troops, a more permanent camp began to develop.

At the end of the war in 1945, the camp housed ex-soldiers of the freed Polish armed forces transferred to the Polish Resettlement Corps. It offered further education and job training to enable troops to enter British civilian life.

In 1948 the camp converted to civilian use, housing Polish families and their dependants who had been displaced by the war.

The camp closed in 1952 and it was returned to the Spencer Stanhope estate.

David Chinnock, a volunteer for the village museum, said: "The camp is steeped in history. One former camp resident who went on to become an archbishop in the Vatican, has sent photographs from his personal collection of his time spent in the camp. It shows him on guard at the camp entrance, which is where the plaque has been placed."