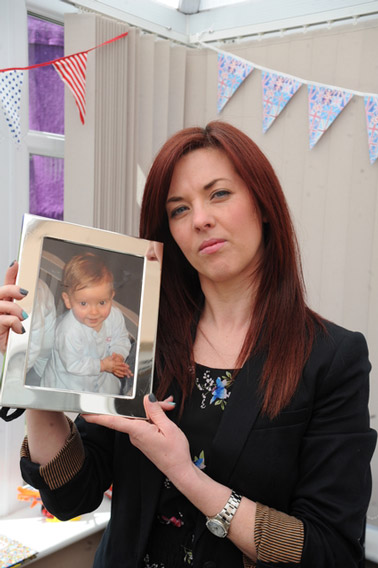 Cubley Mother Appears On This Morning

A MOTHER from Cubley has appeared on national television and met Samantha Cameron after raising £50,000 for charity in the wake of her son's death.

And the week after she met prime minister’s wife as a guest at 10 Downing Street for her work for the Lullaby Trust, which provides support for bereaved families and promotes advice on safer baby sleep.

Nicola, who was joined for the TV interview by husband Ian, 36, said, although it was difficult, the show's hosts helped her relax.

"It was such a brilliant day, there was support for us all the way through.

"The presenters are really lovely people and put us both at ease.

"I was really, really nervous and shaking but I knew if I didn’t go and do that then I would miss an opportunity to raise awareness for the charity and of sudden infant death."

Nicola hosts Alexander's Charity Ball close to the anniversary of her son's death to raise funds for the charity.

She was invited to Downing Street as part of her fundraising efforts - after sharing Alexander's story on ITV's This Morning.

More than six years on, Nicola's impressive fundraising efforts show no signs of stopping but she still has questions about what happened to her young son.

"Alexander was a happy, healthy and very cheeky 17-month-old so his death caused my family untold heartache as well as complete confusion.

"How does a healthy baby go to bed full of beans and not wake up the next morning?"

The toddler remains a big part of the Richardson family and is regularly talked about by his twin brother Harrison, seven, and three other brothers Thomas, 16, Jack, 14 and Joseph, three.