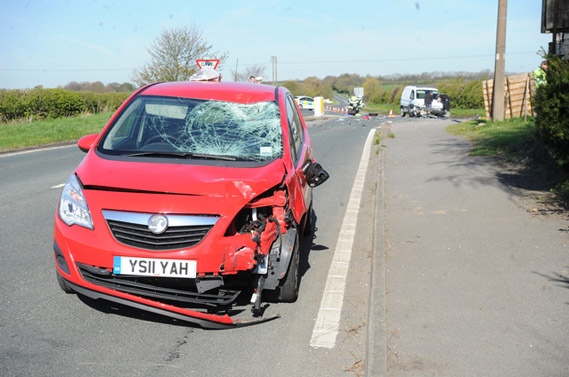 A GARDEN centre owner has called for the speed limit to be lowered on Doncaster Road after another serious crash.

A 21-year-old motorcyclist was taken to Barnsley Hospital following the crash with a red Vauxhall Meriva, at the junction of Doncaster Road and Barnsley Road on Thursday morning.

Police were called to the accident at about 8.11am and the man, from Wombwell, was taken to hospital with a suspected broken leg and pelvis.

He was described as in a stable condition.

Doncaster Road was closed by police in the direction of Barnsley from Yew Tree Garden Centre to Ardsley Crematorium.

Barry Graham, 61, has run Yew Tree for 32 years and said the area was notorious for fatal accidents.

"On this stretch of road, from Dickinson's Farm at Ardsley to the junction with Bellbrooke Avenue, there must have been about ten fatalities in the time I've been here," he said.

"I can think of two incidents where there's been four people killed and one of my regular customers was killed aged 78 crossing the road at the junction with Doncaster Road and Barnsley Road.

"There are a number of occasions when I've opened up and found cars stuck in my fence, too. I had to have it replaced about three years ago when there was accident and they brought the air ambulance out.

"My opinion is it the speed limit should be brought down to 40mph on that junction, like it is when you hit the top of Bellbrooke Avenue. It's a long drag and plenty exceed it (the speed limit) as it is."

Councillor Brian Key said speed limits were necessary for the area but enforcement was the most important factor.