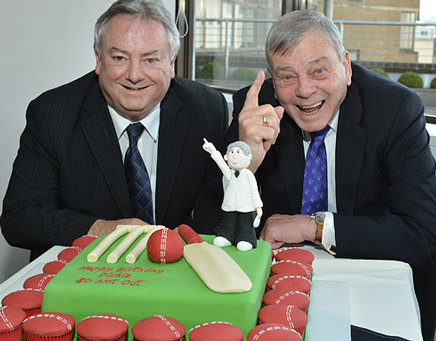 DICKIE Bird is 80 not out and may be celebrating his birthday with his latest book - but fans at Huddersfield University had a special cake to mark his special day.

Legends of soccer and two former top police officers were among the VIP guests when the University of Huddersfield hosted an 80th birthday luncheon.

Not there in person but also sending a special birthday message was the university's chancellor, Sir Patrick Stewart.

Dickie has well-established links with the university, having been awarded an honorary doctorate in 2008 and has played a key part at several events. Earlier this year he performed the ceremonial ground-breaking for a new £22.5 million learning and leisure centre at the Queensgate Campus in Huddersfield.

The lunch was hosted by the University’s vice-chancellor, Professor Bob Cryan.

Among the guests were the former England international footballers Mike Summerbee and Huddersfield-born Trevor Cherry, a Leeds United legend.

Special guests from Barnsley were the mayor, Cllr Dorothy Higginbottom, and owner of the Pollyanna boutique, Rita Britton.