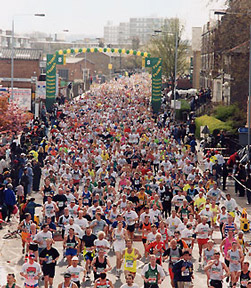 A GRIMETHORPE postie has raised £5,000 for Prostate Cancer UK after completing the London Marathon.

Steven Milner, 30, took part after getting a place through Royal Mail which was fundraising for the charity.

He finished in four hours 15 minutes and raised about £2,500 which Royal Mail have said it will match.

Steven, of Cudworth View, has competed in the Great North Run before but the London Marathon was his first crack at 26 miles.

Luckily he had a day off on Monday but said his round on Tuesday was tough going.