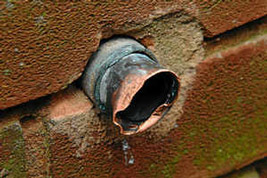 The thieves have struck twice at the home of the elderly widow, who suffers from dementia, in just two days.

Fortunately the first time a length of piping was hacked off at the back of her house on Newstead Road, Athersley North, her neighbour smelled gas and alerted the authorities.

They ensured her gas supply was cut off until the pipes could be safely replaced.

But less than 24 hours later the thieves returned - this time removing even more of the copper piping from the same home.

Some homes are vulnerable because the piping goes outside the house as it links the gas meter downstairs to the central heating boiler upstairs.

Relatives of the 82-year-old, who lives alone, say she has been upset by the incidents and they have been left worried for her safety.

The woman has decided to pay out more than £300 to have the piping re-routed inside the property.

Her concerned son said: "The alarm was raised twice by a very good neighbour who fortunately realised what a very dangerous situation this was and took steps to get help.

"These acts of theft and vandalism left gas escaping into the air and potentially put my mum's home and her life at risk.

"She is the victim here, yet she is paying the cost practically because she is having to fork out money to try to prevent this happening again."

A police spokesman said: “Theft of this nature could potentially be life threatening. Stealing gas pipes from outside people’s homes could result in very serious, if not fatal consequences to both the occupants and surrounding neighbours."

Anyone with any information about who is responsible for the theft is urged to contact South Yorkshire Police immediately on 101, quoting incident 1347 of the 14 April 2013, or call Crimestoppers on 0800 555 111.