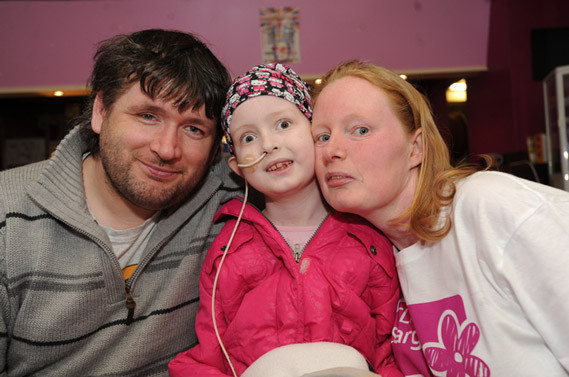 A LITTLE girl who was 'too tired' for her beloved ballet lessons has been diagnosed with leukaemia.

Victoria Walker, seven, usually loves her dancing class and mum Kelly knew something was very wrong when Victoria did not want to go.

She had already been to the hospital and nothing was found - but Kelly pushed for a second opinion.

Now Victoria is having chemotherapy which she will need for the next two-and-a-half years.

Kelly, 31, of Monk Bretton, said: "Victoria has been ill since last year. She had a chest infection, was anaemic and not responding to antibiotics, but nobody seemed to know why - but then Sheffield Children's Hospital found out."

Kelly, her husband David, 34, and Victoria joined friends for a charity head shave at the Full House pub on Saturday. The couple both had their locks chopped and pub landlady Nicola's daughter Summer Ciamprocotti, nine, had a dramatic cut of her past waist-length hair.

She donated her plait to the Little Princess Trust - a charity which provides real hair wigs for children suffering hair loss.

Summer's efforts alone raised over £260 through sponsorship and donations. The cash will go to the CLIC Sargent charity which supports children with cancer.