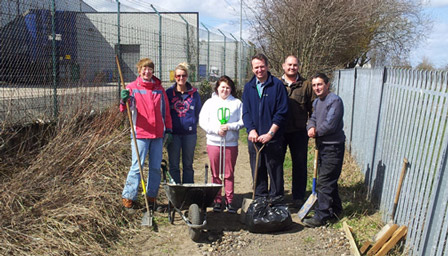 A VOLUNTARY group has been working to maintain a previously-eroded footpath after this winter's bad weather had damaged it.

On April 16, Voluntary Action Barnsley's group worked to spread six tonnes of aggregate on the footpath, which is situated just off Broadway, to improve drainage and make the path more accessible for walkers, cyclists and local residents.

The group also did a litter pick on the 15 metres of path and collected 6 bags of litter - including lots of dog excrement.

Jane Ripley, the resident who helped to organised the work, said: “Voluntary Action Barnsley have done a fantastic job resurfacing this well-used footpath, which is not only used by members of the local community but also by pupils from the nearby ALC, Horizon."

The path was in quite a state after a this year's damaging winter but thanks to the volunteers, the path's now back to its former glory and will offer access to the local community's greenspace.