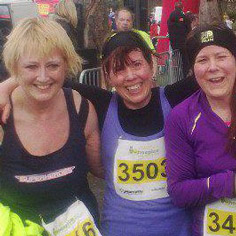 A ROYSTON woman has completed her first 10k race after losing six stones in eight months.

Deana Kirby completed the run in Wakefield, and raised money for Wakefield Children's Hospice along with two friends from Superheroes Fitness in Royston.

She started at Superheroes a year ago and shed the pounds at a bootcamp class, lifting kettle bells, eating healthily and taking part in boxercise sessions.

She lost 14 inches from her waist following the fitness programme dropping from 19st 3lbs to 13st 3lbs.

Deana, 42, of Royston Lane, has since lost another half-a-stone and has dropped seven jean sizes in a year.

She is taking part in the Race For Life 5k in Pontefract in July and hoping to take part in the Cannon Hall 10k race in Barnsley in September.