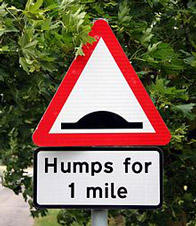 Speed Humps Set To Be Removed

TROUBLESOME speed humps in Royston could be given the boot, according to a Royston councillor.

Cllr Graham Kyte said the traffic calming measures in Midland Road are 'doing more damage than good' and complaints have been made from bus company Stagecoach about them damaging the buses.

He said engineers at Barnsley council have been asked to draw up traffic regulation orders so the humps can be removed.

They were put in place about 15 years ago but have now degraded, he said.