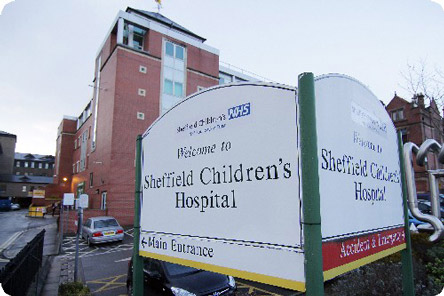 Heartbroken Mother Says Daughter's Life Has Been Ruined After Surgery

A HEARTBROKEN mother says her 'lively and active' daughter's life has been ruined after brain surgery for epilepsy left her paralysed and unable to speak.

Five-year-old Kia Scargill underwent a temporal lobectomy to remove part of her brain at Sheffield Children's Hospital due to severe epilepsy which at times caused up to 20 seizures a day.

However, following surgery, her mum Karen Smith was told things had not gone to plan during the operation.

Kia is now paralysed on her right side, cannot sit up or lift her head unaided and cannot speak or open her right eyelid.

Karen, of Hemingfield, said she's heartbroken by what happened and is struggling to deal with the consequences - particularly as doctors are unsure how much speech and movement Kia is likely to recover.

"We're by her bedside 24 hours a day because she's still all there in her head and she can still hear us," Karen said. "She will lift her good eyelid up if we're close to her and has tried speaking. She tries a little giggle so we're trying to be positive and be there for her."

She said they were prompted to give the go ahead for Kia's operation after speaking to doctors.

According to the Epilepsy Foundation, temporal lobectomy is the most common and the most successful type of epilepsy surgery, with 60-70 per cent of patients being free of seizures completely and 85 per cent showing some improvement in seizure control.

"What's happened since the surgery is far worse as Kia is going to require 24-hour care if things don't improve," added Karen. "It's ruined her life and it's ruined the lives of our family as well."

Complications occur in about two per cent of cases and Karen said she had been told by doctors Kia's were caused by damage to her optic nerves and the removal of too much brain matter - including part of her brainstem - during surgery.