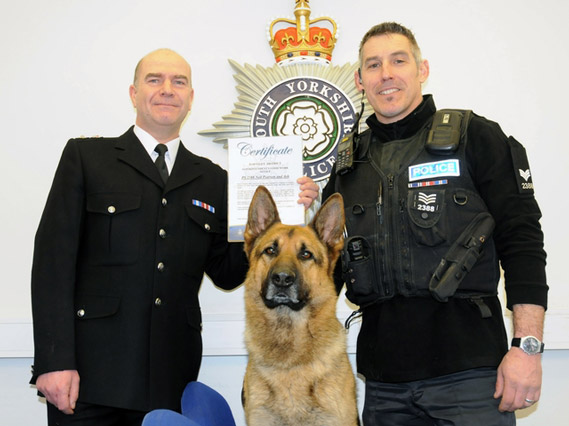 Police Constable And His Dog Commended

A POLICE constable and his dog have been commended for their work.

PC Neil Pearson and his police dog, Ash, were praised by chief superintendent Andy Brooke for their professionalism following a burglary at a business premises earlier this year.

On January 19, a call came into the police stating that the premises on Oaks Lane in Barnsley had been broken into.

PC Neil Pearson attended the premises with Ash, but the burglars had already left.

The pair then tracked a considerable distance over rough country and in snowy conditions following the route of two men. They traced them to an address in Kendray where a cash tin and items taken in the burglary were recovered.

Two men aged 18 and 23 were arrested at the property and charged with burglary.

Eighteen-year-old Shane Watson attended court on February 8 and pleaded guilty. He was sentenced to pay £100 in compensation, a four-month curfew with an electronic tag and 80 hours of voluntary work.

A so far unnamed 23-year-old man pleaded not guilty and is due to appear in court on June 27.

“This was an excellent piece of police work, combining the skills of police dog and handler," said chief superintendent Andy Brooke. "The result was that the suspects were caught with the property suspected to be taken from the business premises. This sort of determination and dedication to duty are what is contributing to reductions in crime in Barnsley.”