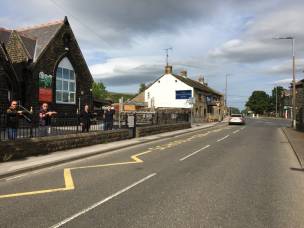 Their efforts were well worth it - one card that got through was from Her Majesty the Queen.

The Powells were thrilled to receive the card which showed a picture of the monarch and wished them many congratulations.

Alan and Stella, both 81, of Kingstone, had to cancel a family celebration because of the heavy snow, but the card put smiles back on their faces.

Mrs Powell said: "It was snowing like mad and the postman told me 'your letter is the only one we've brought today - special delivery.' They all knew what it was because it had the Royal seal on it. I think my son David had been in touch with Buckingham Palace."

As well as David, the couple have two grandchildren and one great grandchild, born in October.