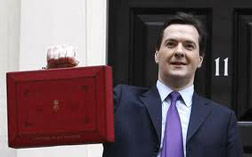 The Budget - What To Expect

Here's a brief outline of what to expect.

Don't expect a VAT cut. The idea of a reduction back to 17.5 per cent mimics a policy from Alistair Darling, but is very unlikely to happen as it'd cost around £12bn.

The Chancellor's already told a cabinet meeting on Monday that government departments will have to cut their spending by 2 per cent over the next few years. The saved money's set to go on infrastructure - which is expected to boost the economy.

Pensions. The proposed 'flat-tier' scheme would be worth £144 a week, and would come into effect from 2016 - a year earlier than planned.

Tax changes. Several tax changes are already pencilled in. The reduction of top-rate tax to 45p, and an increase in personal tax allowance, which'll rise from £8,105 to £9,400.

Alcohol and fuel duty. If recent coverage is to be believed, the Budget could prove to be bad news for drinkers, and good news for drivers.

It's looking increasingly possible that Osborne will attempt to appease health campaigners with some rises in alcohol tax. The extra revenue that'd then be raised might fill the gap left by a potential suspension of an increase in fuel duty, which was planned for the autumn.