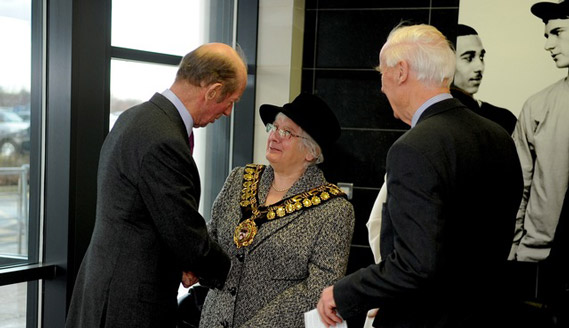 BARNSLEY welcomed HRH the Duke of Kent as he visited venues across the borough.

The Duke visited the RSPB Old Moor wetland centre in Broomhill and the ASOS warehouse in Grimethorpe on Tuesday, where he was welcomed by Barnsley Mayor Cllr Dorothy Higginbottom.

Prince Edward - a grandson of King George V - is a first cousin of the Queen and champions British businesses at home and overseas as well as appearing on the Queen's behalf.

At ASOS, the Duke met with Cllr Higginbottom, consort Dorothy Parkin-Coates and Cllr Linda Burgess before inspecting the centre, which ships clothes to 190 countries, and unveiling a plaque.

At his visit to Old Moor, the Duke officially opened a children's play area which had been paid for with £50,000 from Waste Recycling and Environmental Ltd and £40,000 from the council.