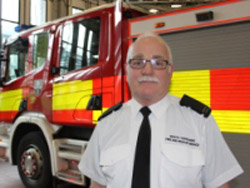 A SOUTH Yorkshire Fire & Rescue officer is to receive an award for his work promoting the use of sprinklers across the UK.

Roger Brason, a fire safety officer specialising in sprinkler protection, has been awarded the Bernadette Hartley Memorial Award, which recognises individuals who make a significant contribution to community safety.

He’ll receive the award at a ceremony at the Houses of Parliament on February 28.

The 62-year-old played a key role in a pioneering project to retro-fit sprinklers on a South Yorkshire block of flats, and is campaigning for sprinklers to be fitted to all new homes in England.

Roger said: “I am delighted to get this award which is recognition not just of my efforts, but also of the efforts of staff across South Yorkshire Fire & Rescue in relation to fire safety.''