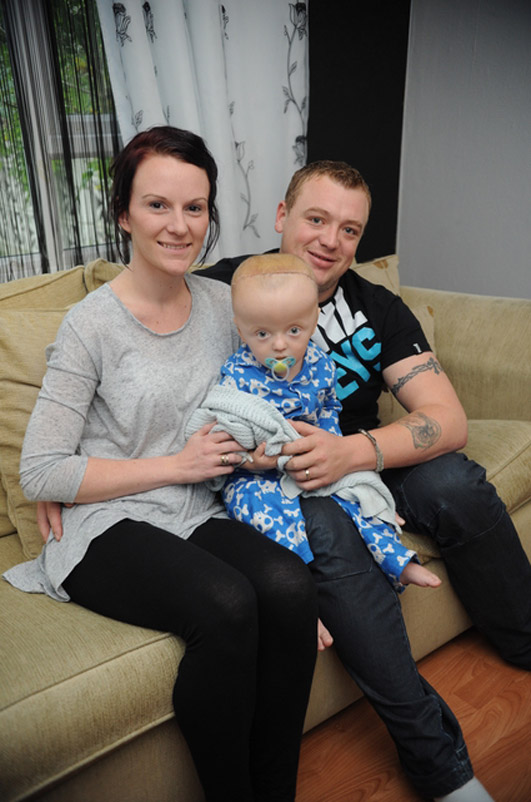 THE FAMILY of a Barnsley tot is having to pad every room in their house after he had an operation to break and re-attach part of his skull.

The back of Coban Sykes's skull is attached to his head with springs after he had a ten-hour operation to ease pressure on his brain.

Coban was born without a soft spot in his skull, which means it is unable to expand to accommodate his growing brain.

But at 19 months old, the tot is unable to understand the dangers of his condition, which affects 1 in 3,000 children and means his family has had to remove furniture and anything with sharp edges or cover them in sponge to prevent him hurting himself.

The operation, at Great Ormond Street Hospital, has left him with 85 stitches and a delicately attached section of skull, which doctors warned might move leaving his head flat or parts of his brain exposed. He faces more operations as he grows.

Mum Nicola, of Woolley Avenue, Wombwell, said caring for Coban is a 24-hour job because the slightest bump to his head can worsen his condition.

"He has had this disability from birth and we were hoping he wouldn't need an operation for a while but his eye sight started deteriorating in September and the doctors at Great Ormond Street said it was important he have the operation then.

"When he was first born the soft spot at the top of his head was fused, which meant his head couldn't accommodate his growing brain. That led to him having an abnormal shaped skull because his brain was pushing to grow.

"They've opened his skull and put metal springs at the back to give him a bit of room and in six months they will need to break it at the front to do the same again as he keeps growing."

Without treatment he would go blind and deaf.

His family, including sisters Rianna, six and Evie, four, are now having to adjust to to their new routine at home.

Nicola added: "The problem is, he can't have a helmet on as his skull is moving around after the operation and a helmet would make it misshappen and cause him problems.

"So it meant that we've got to somehow find padding for everything in the house, walls, cot, bed, everything really because the slightest knock can be very serious for him.

"It's very dangerous for him now, basically his head his like a sponge and because he's toddling we're having to follow him constantly to make sure he doesn't walk in to something.

"We've had a difficult time of it. It hasn't been easy. It's all come at once to be honest and having to travel to London isn't easy - especially because he's got two older sisters at school.

"Coban needs 24-hour care, and because of what he's been through with the operations he's very clingy. We just need a bit of help really."

The family have to pay for the padding themselves and a fund-raiser has been organised for January to help them pay for Coban's care as they aren't entitled to any grants.

To help the family email nickysykes@hotmail.co.uk