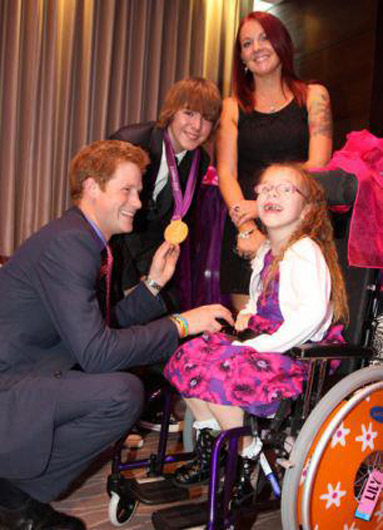 A BARNSLEY lad has been given a prestigious award after being named the most caring young person in the UK.

Ryan James Skidmore, 14, of Bolton on Dearne went to a glitzy party for the Wellchild's award ceremony - meeting royalty like Prince Harry and other celebrities.

He was nominated by a family friend for the help he offers his sister Lilly Mae, who has a long term illness.

A spokesman for Wellchild said: "Ryan has a little sister Lilly Mae who has a rare syndrome which has left her with a host of serious health problems.

"Ryan helps his parents look after Lilly and even gives his mum time in bed to catch up on sleep, bringing her breakfast in bed.

"Ryan always sticks up for his little sister and does his best to support her. His mum has painful hip problems which mean she is sometimes confined to bed. Ryan will help out as much as he can as he loves his sister so much."

Mum Vikky added: "It was so wonderful that Ryan was recognised for all he does that's above and far beyond what other children his age would do. He is fantastic.

"He doesn't ever moan when he is passed from pillar to post, it must be so hard on him but he just smiles and helps.

"He'll tell me to rest and brings me cups of tea and this is after getting up 7 days a week to do a paper round so he can have a little money as we've none. But he ends up buying us all treats with it."

On Sunday, September 16 the family will be taking part in the Bluebell Wood Big Wellie Walk around Clumber Park to raise money.

If you'd like to support them, you can donate here.