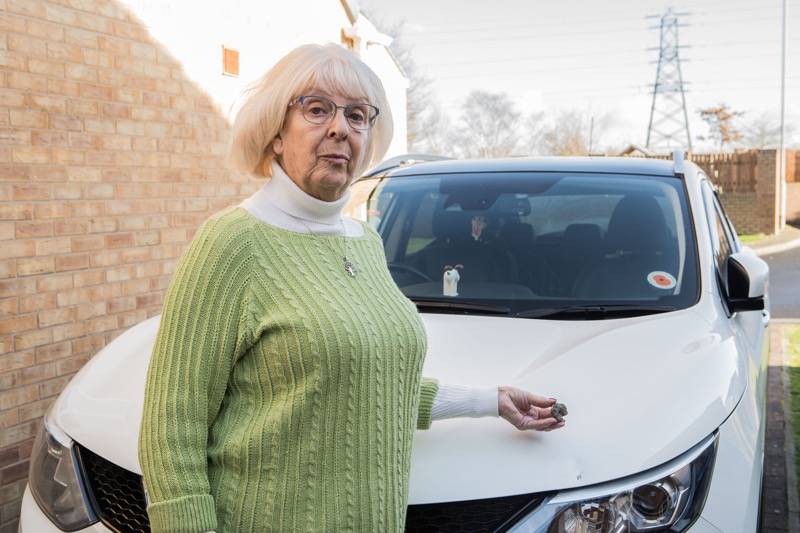 A PENSIONER believes that youths are out to ‘seriously hurt someone’, after a brick was lobbed at her car as she drove towards town.

Susan Green, 71, of Park Meadows, Shafton, was left shaken after youths threw a stone at her car as she drove on the Cudworth bypass.

It follows multiple reports in recent weeks of rocks and bricks being thrown from what remains of the dismantled railway bridge near where Barnsley Road meets the bypass.

The latest incident, which happened on Friday at 6.50pm, caused Susan to stop but as it was dark, she could not see who was responsible or where the culprits had gone.

“I could see the rock flying towards me but at that speed I couldn’t stop,” said Susan.

“If I’d swerved into oncoming traffic or stopped suddenly because I was hit, who knows what would have happened?”

“These youths are not out to have some fun, they really want to hurt someone.

“I went back the next day with my husband and the rock was laying in the middle of the road. We had a walk around and close to Cudworth Park there is a pile of rocks on the verge ready for when they return. There are so many

“I’m a 71-year-old disabled woman and I need my car. Half term is coming up and I’m afraid they will spend their time putting motorists lives a danger by throwing these bricks. It’s not on.”

Susan’s incident is the latest in a spate of attacks which seem to have increased since the end of January.

In January, the Chronicle reported how 72-year-old Anthony Kitching had a stone thrown at his car, and following that Ellen Jones, who lives in Cudworth, contacted the Chronicle to report how her car was also targeted while she was driving with her five-year-old daughter in the car.

She said: “I was driving home at around 6.30pm when we heard a bang and my daughter immediately asked what it was. I was close to home so when we got there I could see the dent and I knew my car had been hit with a stone.

“I didn’t bother contacting the police because they won’t catch the culprits. It’s scary at that time and you can’t see where they go. The roadworks close to the bridge is also not helping matters.”

The topic as raised at the Cudworth and North East PACT meeting on Wednesday, and Sgt Richard Wilson said that all agencies including the police, Network Rail and Barnsley Council are working together to resolve the issue.

“Network rail have conducted a site survey and we are looking at ways to secure the site,” said Sgt Wilson

“Antisocial behaviour at Cudworth Bridge will be our PACT priority and I continue to urge people to report any incidents by contacting 101 or 999 if it’s an emergency.”