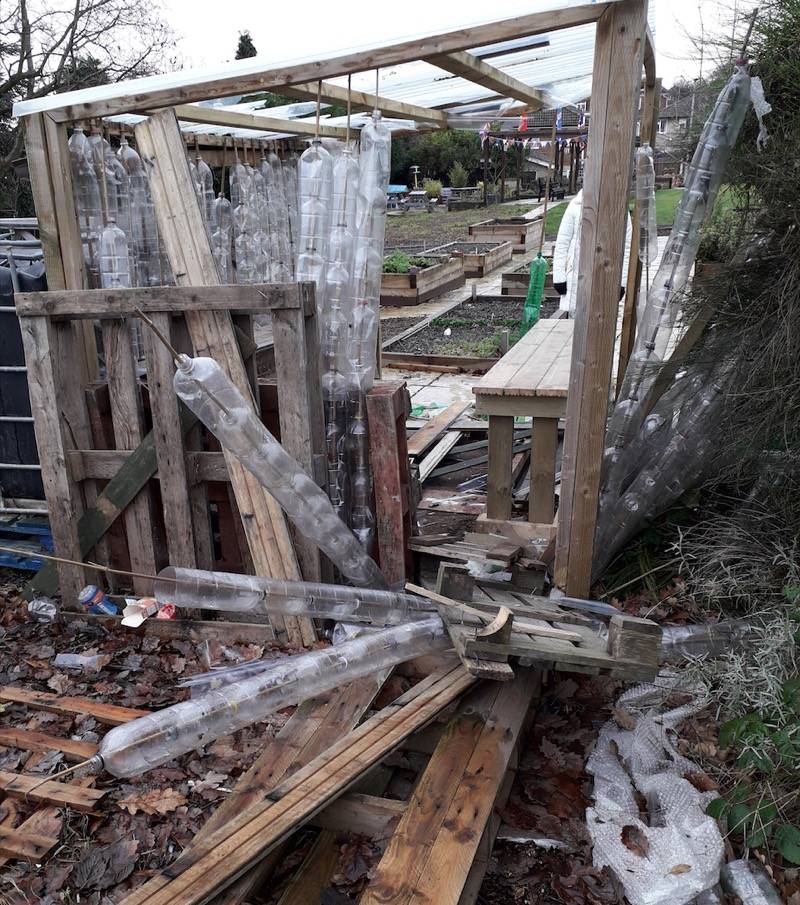 THE chairman of a community garden project has said he is ‘at a loss’ over what to do after vandals causing yet more damage attacked a resident who confronting the alleged culprits.

Allan Wood, the chairman of Owd Martha’s Yard, which sits behind the Belmont Working Men’s Club on West Street, Hoyland, said that there has been a lot of damage to the garden this year and that vandalism in general is on the rise in Hoyland.

The latest incident of damage to the garden came just before Christmas, with Owd Martha’s ECO greenhouse ‘trashed’ until it is now of ‘absolutely no use’.

Allan said a resident – who does not want to be named – was ‘struck on the head’ after confronting the people who were causing the damage and had to be taken to hospital.

“A resident approached some people who were ‘messing about’ in the garden, resulting in him being struck on the side of his head with what appears to be a road pin, which was supporting warning tape around some cracked paving flags,” he said.

“He had to go to hospital for treatment to a nasty gash above his right ear. Hoyland in general is suffering with an outbreak of unruly behaviour. It appears around twelve people were in the garden at the time, plus the unfortunate resident who heard the noise in the garden.”

As chairman, Allan said ‘louts’ have been causing problems and damage to the garden for the past few months. Last month, he sent out a newsletter to the Chronicle, councillors, MPs and neighbourhood police officers saying that teenagers had been abusive to volunteers and claimed there was evidence of drug-taking in an area designed for young children.

He added that the ECO greenhouse had been damaged before and volunteers found a syringe in there, but as it was so badly damaged by the recent vandalism, it will have to be dismantled.

“The ECO greenhouse was formed out of 1,500 two litre soft drinks bottles and attached to a timber framework, all this took many hours work,” he said.

“It was completed early this year and has successfully grown tomatoes, peppers and other vegetables. We have had a small amount of vandalism this year from around May time, but, over the next few months, this has escalated into more problems within the garden.

“We had made a den which was a favourite with our younger visitors, but when we found that it was being used at nights for other reasons, we decided to dismantle it.

“The next place used for ‘other reasons’ was the ECO greenhouse, and when one of our gardeners found a syringe that had been pushed into a plant pot, that was when we decided to take some action. The door was removed, but didn’t stop proceedings. After that, the greenhouse was damaged over a few weeks, until last weekend, when it was really trashed.

“We have decided that, as the greenhouse is totally unusable, we are going to dismantle what is left and dispose of the rubbish, but we do intend to rebuild next spring.”

Allan said police are visiting the area, including Owd Martha’s Yard, but said it is difficult for them to ‘be in the right place at the right time’ when an incident happens.