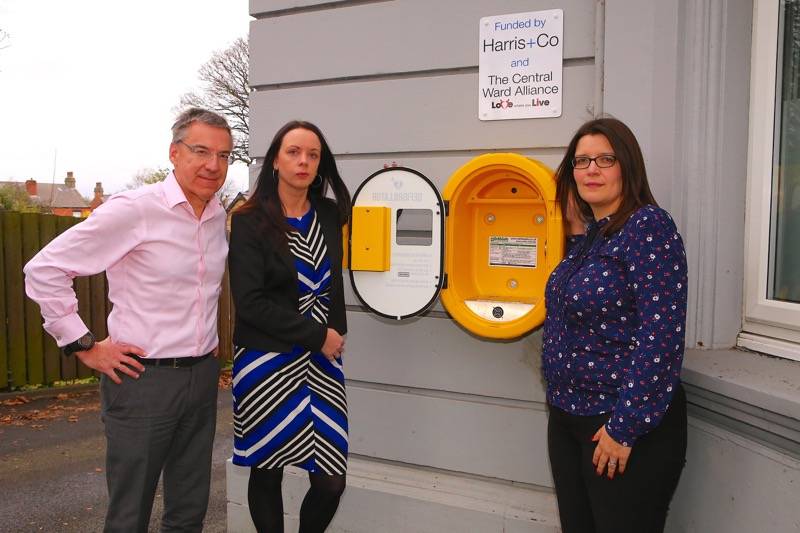 THIEVES who reportedly stole two public defibrillators have ‘achieved nothing’ other than putting people’s lives at risk, say those responsible for putting them in place.

Two community defibrillators devices crucial to improving chances of recovery for those suffering cardiac arrest sited at the town hall and Harris and Co accountants, on Huddersfield Road, have been reported stolen in what is suspected to have been a targeted series of thefts.

Nichola Hawden, of Harris and Co, started the campaign for the defibrillator outside her workplace after her father, Steve Croft, collapsed before a Barnsley match last year and had to be resuscitated on the pitch at Oakwell.

Nichola said: “I’m absolutely gutted. From personal circumstances, I know how important early access to a defibrillator is. It saved my dad’s life.”

She said the defibrillators are registered with a serial number that is traceable, and don’t work unless used correctly in the right circumstances.

“One thing we want to get across is that they’re useless to anyone that doesn’t need them,” she said.

“They only shock if they detect the right heart rhythm.

“They’re achieving nothing by stealing them.”

The firm funded the campaign alongside the Central Area Team, and it was installed in September.

Steve, from Royston, collapsed last September before Barnsley hosted Burton Albion, and was assisted by staff from both clubs before the Air Ambulance landed on the Oakwell pitch.

A volunteer at the time, he has since campaigned for more publicly accessible defibrillators.

“It’s not as if the equipment is worth anything to anybody, there’s no resale value and you can’t use them,” he said.

“If anybody needs it, they might’ve lost that chance to be given a second chance by some mindless person.

“I know how much work Nichola and her colleagues have put in. They don’t have to do it. It’s unfortunate this is how a small minority repay them.”

The thefts follow a similar disappearance in August of a defibrillator outside Tony’s Barber Shop, on Racecommon Road.

On that occasion, the equipment was returned to its cabinet the following month.