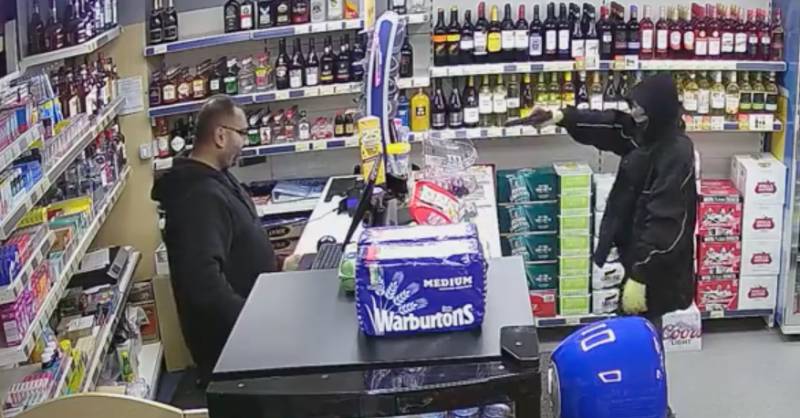 A SHOPKEEPER seemed to remain eerily calm when a gun was brandished in his face during an armed robbery, chilling CCTV footage shows.

Jaz Sandhu, who manages Rockingham Mini Market on Rockingham Street, Honeywell, initially thought a friend was playing a joke on him when a man came into his shop demanding money and pointing a gun at him on Tuesday.

It was only when the masked raider placed a bag on the counter and waved the gun in his face for a second time, that Jaz knew he was the victim of an armed robbery.

The robber made off with just £60.

“My family have been running the shop for over 33 years and this is unbelievable,” said Jaz.

“There was no one in the shop at the time so he must have been prowling and took the opportunity when he knew it was empty.

“I genuinely thought it was a joke because the guy was so nervous, dressed in a big coat and gloves. It looked as if he was going to leave when I first said something but when he turned around and pointed the gun in my direction I knew it wasn’t.

“My niece had only just left the store 30 minutes previously and she’s nursery age. Anything could have happened.”

Following the incident which happened at 6.58pm, Jaz contacted the police before uploading CCTV footage of the incident on Facebook, which has been shared more than 1,000 times.

“This guy needs apprehending especially because he’s armed with a gun. It’s sad how easy it is for people to get hold of and it needs addressing.

“There was only £60 in the till. People tend to use their card more often than cash which in hindsight is a good thing. I had so much more stock worth thousands in store so it’s good he didn’t take it.

“He seemed like an amateur and I have no idea if he had any intention to shoot. The ending could have been a lot different.

“I’m just glad that my dad wasn’t on the shop floor. He’s in his 60s now and it’s not something he or anyone should have to go through.”

Following the incident, Jaz has praised the Honeywell community and the police for their efforts and kind words.

“It’s times like this that you remember just how close knit the community is and I can’t thank people enough for popping in to see how I am. I’ve been brought up in Barnsley and this is a good community.

“The police have also been fantastic. They were scouring the area and knocked on every door to try and find out more information. I can’t praise them enough.”

Despite the armed robbery, Jaz kept the store open for the rest of the evening and said he is not going to let the incident effect him.

“At the end of the day there is nothing more we can do security wise. If people want to come and steal they will do so. I can adopt what I’ve seen in Liverpool and install a hatch surrounding the till but it’s not worth it.

“It wasn’t my average bonfire night but I’m grateful it wasn’t a lot worse.”

A police spokesman said: “An investigation is underway following a reported armed robbery at a convenience store in the Honeywell area of Barnsley on Tuesday.

“Officers were called at around 7pm after reports that an unknown offender had entered the Rockingham Mini Market on Rockingham Street and threatened the shopkeeper with a small handgun.

“The offender stole a small amount of cash and left the scene. No one was injured in the incident.

“If you have any information that might help our enquiries, please contact 101 quoting incident number 836 of November 5.”