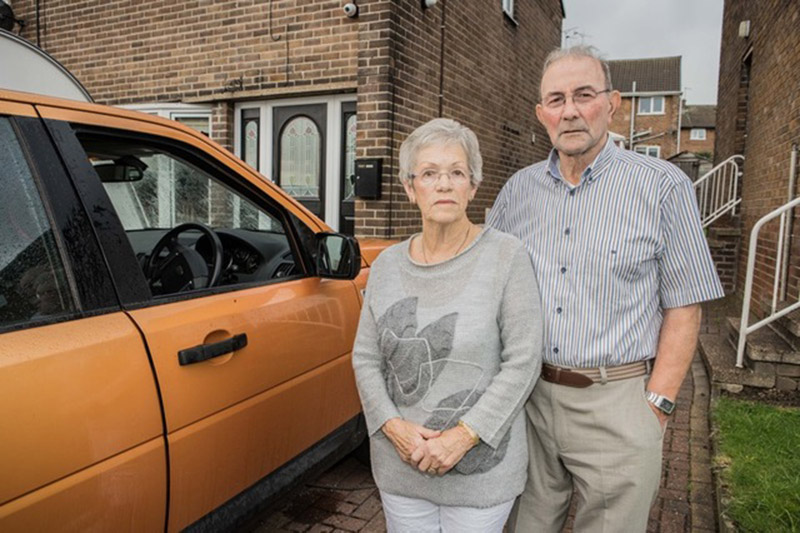 AN ELDERLY couple have been left horrified after the windows on their car and house were smashed by masked vandals – less than two years after arsonists poured petrol through their letter box and set it alight.

Elizabeth Batley, 83, and her husband Albert, 75, said they had never experienced any trouble on their doorstep until the attack in December 2017 but it left a lasting impression on them.

Then on the early hours of Monday this week, they were appalled to find their living room window had been smashed.

The couple contacted police and it wasn’t until officers arrived at the property on Fish Dam Lane, Monk Bretton, that they were told three windows on their car had also been smashed.

The incident has left the couple feeling distraught and wondering why they have been targeted.

Elizabeth said: “I’ve had a cold for the last week or so and I woke up coughing and that’s when I heard a noise, a bit like a bang. My husband also heard the same noise but we didn’t think much of it because we live close to a factory and on a main road so we’re used to the odd sounds.

“I decided to go downstairs and make myself a drink because I couldn’t settle and when I went to open the living room door I couldn’t push it open. I could feel a cold breeze so straight away I called Albert and said something had happened and contacted police.”

Elizabeth has lived at the property for 59 years and for most of those years never had any trouble on her doorstep, but this is not the first time she has been subject to a seemingly random attack.

She said: “In December 2017 someone attempted to set fire to my house. They poured petrol through our front door and set it alight.

“The fire alarm woke us up and we were able to put the fire out before it spread any further but we had to replace our front door.

“We just don’t understand why yet again we have been targeted and left to pick up the pieces. It’s a worry and these incidents have really affected me.”

Following Monday’s incident, the couple were left without a car for two days while they waited for the windows to be replaced in addition to waiting in the house for the living room window to be replaced.

“We are elderly people and we rely on our car especially for doctors appointments and it’s an additional expense paying to have the windows replaced. The people that have done this to us are scum.”

A spokesman for South Yorkshire Police said: “On Monday October 7 at 2am police received reports of criminal damage at a property on Fish Dam Lane, Monk Bretton.

“Officers attended the scene and discovered damage to a vehicle, and to a window.

“If you have any information which might help our officers in their enquiries, please report it to us on 101 quoting incident number 65 of October 7.”