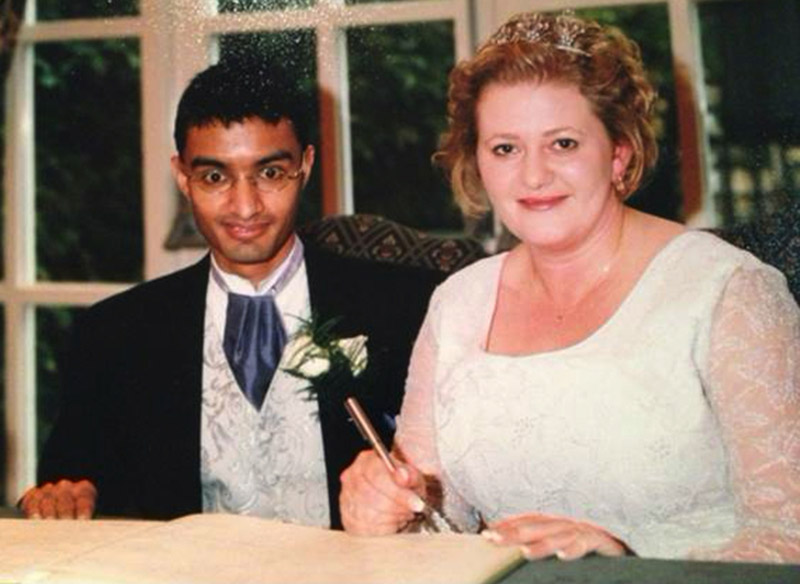 A HEALTH campaigner whose wife died of a brain haemorrhage has been named as one of the first people to take up a new post with the NHS.

Mahmud Nawaz, 49, will become an organ donation ambassador, taking up a voluntary role promoting education and awareness of organ donation.

Mahmud lost his wife Sharon in 2004 when she was just 32. Sharon had died from a severe brain haemorrhage, becoming unconscious and collapsing while using the shower. She had been passionate about organ donation and had made it clear to Mahmud that after her death, her organs should be donated.

“My immediate thought was that she had fainted,” said Mahmud, formerly of Oakfield Walk, Pogmoor. “I shouted her mum, and we called 999. The ambulance operator talked me through mouth to mouth resuscitation, but without any joy.

“At Bradford Royal Infirmary A and E, the doctors worked frantically as I sat in the waiting room.

“Then they came out and told me that there was little more they could do, and asked me if had I considered organ donation. I was devastated and felt so alone. I’d never really experienced death before.”

As part of the role, set up for Yorkshire by NHS Blood and Transplant, Mahmud will serve in a voluntary role providing education on organ donation in communities through talks and donation promotion stands.

Ambassadors are provided with training, resources and support to feel comfortable and confident in the role and serve as valuable links into the community. “

Of course the answer to the question about organ donation was yes,” said Mahmud, who sits on the Organ Donation Committees for Leeds and Mid Yorkshire.

“Ever since I had known her, Sharon was passionate about organ donation.

“She carried a donor card, but she never pushed anyone to carry one.

“Her lungs and her heart could not be used because of the damage of the brain haemorrhage though.

“But her kidneys and her liver (split into two) saved four people, including a little boy of one-and-a-half who wouldn’t have made it to two without Sharon’s liver. That above all made me cry tears of joy. She loved children, she would have been proud of that.”

Since Sharon’s death, Mahmud said he has registered to be a donor.

“And I have done what I can to create awareness of organ donation,” he added.

“This was Sharon’s gift, not mine, to donate her organs. My memorial to her is to spread the word about organ donation and share my story and try to encourage everyone to register and tell their loved ones their wishes. If just one more person becomes a donor, it’s worth it.”